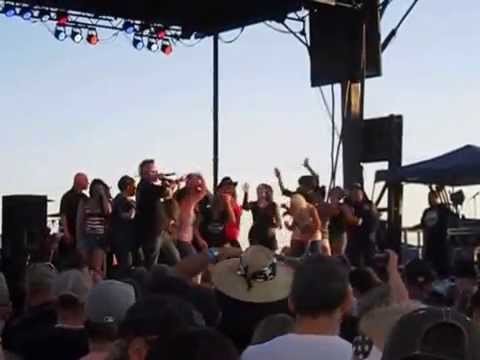 Your party is sailing or traveling in a submersible (like the Apparatus of Kwalish) and interesting things besides combat happen!
Bonus: Combat Encounters 1. 2. 3. 4. 5. 6. 7. 8. 9. 10. 11. 12. 13. 14.
Edit 1: General comment about struggling with sub-lists. This got deleted in the great silliness of 11:30p on 7/11/2020 (see edit 2).
Edit 2: Well. Dang. That will teach me to edit and post only on a web form without a back up copy I had 78 things with complex lists for some of them and accidentally saved over them and lost all of that data. I'll have to redo it. Please don't down vote me in the meantime. I spent like 5 hours on it this afternoon and I'm devastated that I lost it all...
Edit 3: I've made a simple redo of the 5 hours of work and saved it elsewhere. It does not reflect the synthesizing of comments and repeats, the separating of combat from non-combat in people's suggestions, the removing of cuss words, the grammatical edits, or the embellishing that I did. I plan to do that in the next couple of days, but here is something in case you were counting on this list like tomorrow or something. Please note that the numbers may change on entries and if you comment on a specific entry, you may want to quote some of the content too. There are 20 of these that were originally combined, moved into combat, or otherwise not included in version 1.
Edit 4: the list says 100 but there are combat encounters in there. I still want to re-synthesize the list when I have a couple hours. I want to break out combat separate from non-combat, and possibly separate on the ocean vs. underwater.

NOTE: This is FAKE HOCKEY. To talk about actual hockey, go to the latest Daily Discussion thread
 Trade Deadline Tonight will continue TONIGHT!
 The /hockey Trade Deadline Game is back for day 2! Starting today at 8:00 AM MT trading is officially open again. Trading will run until Thursday, January 30th at 6:00 PM MT.
You are not late! You can still sign up at http://www.tdgdb.com
When you are traded, change your flair on hockey-related subreddits and spend the week from January 31st through February 7th cheering for your new team.
Here are this year's reporters, the people who will break news of trade negotiations:
But remember


NO TRADE IS OFFICIAL UNTIL POSTED IN THIS THREAD!


MILWAUKEE - The National Indian Gaming Commission has proposed fining the St. Croix Chippewa $5.5 million over accusations that the Wisconsin tribe's leaders pocketed at least $1.5 million in casino funds.
The Milwaukee Journal Sentinel reports that the commission's chairman, Jonodev Chaudhuri, issued a notice of the proposed fines on Thursday against the Burnett County-based tribe.
It comes a month after Chaudhuri charged the tribe with 527 violations of federal and tribal ordinances.
Many members of the western Wisconsin tribe live in poverty.
The tribe can appeal the recommended fine to commissioners.
The tribe runs St. Croix Casino locations in Turtle Lake, Wis., and Hertel, Wis.; as well as the Hole in the Wall Casino in Danbury, Wis..